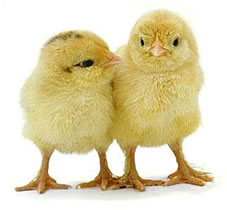 For instance, scientists have found that chickens clearly understand cause-and-effect relationships, an advanced comprehension skill that puts their intellect beyond that of dogs. In the book The Development of Brain and Behaviour in the Chicken, Dr. Lesley Rogers, a professor of neuroscience and animal behavior, concludes, ”It is now clear that birds have cognitive capacities equivalent to those of mammals, even primates.”

For example, chickens are able to understand that objects still exist even after they are hidden or removed from view. This level of cognition is actually beyond the capacity of small human children.

Researchers also recently reported that chickens “can anticipate the future and demonstrate self-control, something previously attributed only to humans and other primates.”

Scientists made this discovery after they observed that when given the option between pecking a button and receiving a small food reward instantly or holding out for 22 seconds in order to receive a larger food reward, chickens in the study demonstrated self-control by holding out for the larger reward over 90 percent of the time. 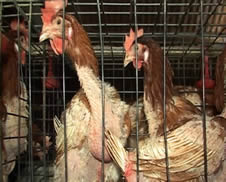 They interact in complex ways that are indicative of what anthropologists call “culture.” For example, researchers have shown that chickens learn from observing the success and failure of others in their community. One experiment that demonstrated this finding involved teaching one group of chickens to peck red and green buttons a certain number of times to obtain a food reward.

Researchers were surprised to find that when a new group of chickens watched those who had learned how to push the buttons for food, the new chickens quickly caught on by watching the others.

At a scientific conference, Dr. Christine Nicol, who worked on the study, told her colleagues, “They may be ‘bird brains,’ but we need to redefine what we mean by ‘bird brains.’ Chickens have shown us they can do things people didn’t think they could do. There are hidden depths to chickens, definitely.”

Chickens have a cultural knowledge which they pass on

Researchers have also found that chickens have a cultural knowledge that they pass down from generation to generation. John Webster, a professor at Bristol University, set up a study in which he gave chickens a mixture of yellow and blue kernels of corn. The blue kernels were tainted with chemicals that made the birds feel sick, and they quickly learned to avoid the blue corn entirely (this is also another example of their understanding of cause and effect).

When the chickens in Webster’s study had their young, he spread yellow and blue corn around the farm, and even though he made it so that both types were harmless, the mother hens remembered that the blue corn had previously made them sick, and they steered their young away from it.

In an article in the London Times, Webster explains, “What this tells us is that the mother hen has learnt what food is good and what is bad for her, that she cares so much for her chicks she will not let them eat the bad food, and she is passing on to her young what she has learnt. To me, that is pretty close to culture—and an advanced one at that. Chickens are sentient creatures and have feelings of their own.”

Scientists have been so impressed with the cognitive capabilities of birds that a group of international experts recently called for a new naming system to reflect the advanced nature of birds’ brains.

According to an article that appeared in The Washington Post, “The new system, which draws upon many of the words used to describe the human brain and has broad support among scientists, acknowledges the now overwhelming evidence that avian and mammalian brains are remarkably similar—a fact that explains why many kinds of bird are not just twitchily resourceful but able to design and manufacture tools, solve mathematical problems and, in many cases, use language in ways that even chimpanzees and other primates cannot.”

The poultry industry is one of the most wasteful and cruel intensive farming industries. Millions of male chicks are thrown into dustbins to die, at just a few days old, because they are of no commercial interest for the meat industry. Male chicks are also worthless to the egg industry because they don’t lay eggs, so every year millions of them are tossed into trash bags to suffocate or are thrown—while still alive—into high-speed grinders called “macerators.”

According to the Compassion in World Farming (CIWF) the recycled remains of unwanted male chicks, growth hormones, yolk, colourant and other additives end up as feed for the hens.

Most people’s mental image of egg production is that of a farmyard in which chickens are free to roam about, to fly, and to even roost in the trees. To the side of the yard is a chicken coop, where the chickens are free to enter, to leave, and to nest and lay their eggs. Then each day the farmer comes out with his basket and collects the eggs for market or personal use.

While such a situation may exist on some individual small farms, nothing is further from the truth when it comes to farms engaged in commercial egg production. Unfortunately, many ethical vegetarians believe that the eating of eggs is OK as it doesn’t cause the death of the chicken.

Here’s what really happens on a commercial egg farm, where chickens raised for their eggs endure a nightmare that lasts several years.

The battery cage system is an industrial farming system in which laying hens spend their short lives confined in small wire cages with several other hens.

Why is this a problem? 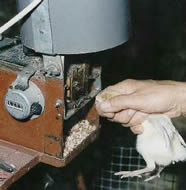 The welfare of the egg-laying hen is directly linked to her ability to act out natural behaviours. A happy hen is a bird free to forage, take exercise, preen, dust-bathe, take refuge on a perch whenever she feels vulnerable and build a nest in which to lay her eggs. These natural behaviours are denied to hens kept in the battery cage system.

The wire floor causes problems for hens’ feet as their claws can become twisted around the mesh, further reducing the hen’s chances of exercise and sometimes preventing her from reaching the food and water supply.

Because of their close proximity to each other, aggression can become a problem with hens attacking their cage mates. In an attempt to stop the physical injuries of such anti-social behaviour, hens are often de-beaked, removing a third of the bird’s beak using a red-hot blade – a case of treating the symptom, rather than treating the cause.

Scale of the problem There are over five billion egg laying hens worldwide, and some 70-80% of them are housed in battery cages for the duration of their lives. In South Africa, more than 18 million hens are kept caged in battery systems until they become “spent” and are sold for the pot as “Cornish hens”.

The alternatives Barn (perchery) systems – in this system the hens are kept in loose flock sheds with raised perches or platforms. The flooring must be littered, often wood-shavings are provided, and the stocking density numbers are 25 hens per square metre of floor space, with 15cm of perch provided for each bird.

Free range systems – free range hens are usually kept in houses similar to those used for barn systems, but they have access to the outdoors (which must be mainly covered with vegetation) during the day and space allowance of between 2.5m2 and 4m2 per hen. Without question, the free-range system offers the hen a more natural environment and the freedom to act out her normal behaviours – offering mental and physical welfare improvements over all other systems. 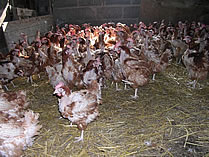 Chickens raised for their flesh, referred to as “broiler chickens” by the meat industry, spend their lives crammed into massive,
windowless sheds that typically hold as many as 40,000 birds.

Chickens can function well in groups of up to about 90, a number low enough to allow each bird to find his or her spot in the pecking order. In crowded groups of thousands, however, no such social order is possible, and in their frustration, they relentlessly peck at each other, causing injury and death.

The intense confinement and overcrowding on factory farms also results in unimaginable filth and disease. The chickens are forced to breathe ammonia and particulate matter from feces and feathers all day long. Many suffer from chronic respiratory diseases, weakened immune systems, bronchitis, and “ammonia burn,” a painful eye condition.

Chickens are also genetically manipulated and pumped full of drugs to make them grow faster and larger—the average breast of an 8-week-old chicken is seven times heavier today than it was 25 years ago.

Because of this unnaturally accelerated weight gain, these very young birds frequently die from heart attacks and lung collapse, something that would never happen in nature.

According to Feedstuffs, a meat industry magazine, “broilers now grow so rapidly that the heart and lungs are not developed well enough to support the remainder of the body, resulting in congestive heart failure and tremendous death losses.”

In addition, chickens on today’s factory farms almost always become crippled because their legs cannot support the weight of their bodies. In fact, by the age of 6 weeks, 90 percent of broiler chickens are so obese that they can no longer walk. Many crippled chickens on factory farms die when they can no longer reach the water nozzles. Source www.biophile.co.za by Animal Voice

Beauty Without Cruelty wishes to emphasise that free range farming methods are equally unacceptable to us and many other animal rights organisations and supporters, as the end result is still captive lives and slaughter, however it is recognised that, for now at least, some lesser evil is to be found using ‘kinder’ options. We look forward to a day when the consumption of sentient beings is no longer an option.

“In all the round world of Utopia there is no meat. There used to be, but now we cannot stand the thought of slaughterhouses. And it is impossible to find anyone who will hew a dead ox or pig. I can still remember as a boy the rejoicings over the closing of the last slaughterhouse.” Wells, H. G. A Modern Utopia