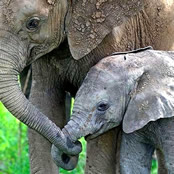 For centuries elephants have been persecuted and slaughtered by man for their ivory, and in more recent times other body parts of these great beasts have also been turned into ridiculous curios such as elephant foot coffee tables and elephant tail fly whisks. Across Africa and Asia, man-made boundaries have gone up, preventing elephants from following their natural migratory paths, which has led to an unnatural ecological balance as elephants are forced to feed in an ever-shrinking environment. Other man-made conflicts such as war and increased human population vying for the same land have impacted heavily on elephants’ safety. To call this situation an “elephant problem” is disingenuous. It is a man-made problem, which victimises elephants.

Culling (a euphemism for killing) has been a favourite option for controlling elephant populations in various African countries in the past. However, in 1994 a moratorium was placed on culling in South Africa, thanks to the concerted efforts of various animal rights organisations both local and international, and to the resulting public outcry over this most cruel and devastating practice.

Now, however, the South African government has given the green light to culling as a management tool once more!

SA Department of Environmental Affairs and Tourism: Norms and Standards for Elephant Management.

On February 25th, 2008 the Minister for Environmental Affairs and Tourism announced the final draft on the Norms and Standards for Elephant Management (NSEM) and included the option to resume culling as one of the “tools” to be used in elephant population management in South Africa. Beauty Without Cruelty has loudly condemned this decision. For a full reading of the NSEM, go to www.environment.gov.za.

The following are suggestions for non-lethal options to elephant population management and a background to the South African situation.

One of the options proposed for the control of elephant populations is by manipulating the spaces in which they live. Broadly, this means controlling water supplies (opening and closing water holes), linking protected areas through the creation of corridors and opening up ranges by acquiring additional land. A leading proponent of this style of management is Rudi van Aarde, director of the Conservation Ecology Research Unit (CERU) at the University of Pretoria. He believes that by freeing elephants from intense interference by humans, natural checks and balances on elephant populations will be restored. His views have been gaining ground in scientific circles and he was invited in April 2007 to present his findings to 700 conservationists in East Africa.

The team at CERU gathered satellite data from collared elephants throughout the Southern African region and the picture which emerged is that some elephant populations seem to be increasing, some are decreasing and others have stabilised. In Zambia, where poaching is out of control, populations are declining and most surviving elephants have no tusks and have not reached a great age. In Botswana, which is thought to harbour a quarter of the continent’s elephants, the population seems to be levelling out. The same is true for Zimbabwe’s Hwange National Park. South African elephant populations are largely on the increase.

Six collared elephants in the Caprivi Strip showed how national boundaries are meaningless to these great creatures. All of them spent time in at least two of the bordering countries: Angola, Botswana, Namibia and Zambia. Similarly, elephants now drift between Kruger and Mozambique, with the removal of the boundary fence between these two countries.

CERU’s work has also shown a clear correlation between increased populations and a slowing of the breeding rates. Conversely, when populations are under threat, the breeding rate rapidly increases (humans are no different – after the First World War, there was a massive surge in the number of baby boys born).

Immuno-contraception has proved successful, but difficult and highly intrusive to manage. It requires yearly darting, either from vehicles or helicopters, which impacts negatively on elephant behaviour. However, in a seven-year study in the Greater Makalali Game Reserve, where the population stands at 73, there was a zero growth rate in numbers in the last four years of the study. Costs of administering the contraceptives are not onerous, calculated at about R1000 per elephant per year in 2005. It seems that for smaller, fenced-in populations, immuno-contraception could be a viable control method. 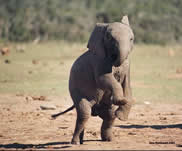 The issue of captive elephants has been given due consideration in the Norms and Standards for Elephant Management and any further capture of wild elephants for commercial use has been banned. However, no mention is made of controlling elephant breeding in the captive situation. Cruel training methods have also been banned, but as with many laws in South Africa, there is no one to police the situation and what takes place on private properties goes on unseen and unknown to the public. A complete ban on the commercial use of elephants should have been put in place.

Other aspects of concern in the DNS include an incorrect definition of captive elephants, being animals kept on land of less than 2000ha (unscrupulous operators would then just keep their animals on land a little over 2000ha and still continue to work, train and confine them), as well as allowing genuine orphans to be taken for captivity and training rather than to be rehabilitated.

On 18 July 2008, CITES (Convention on International Trade in Endangered Species) voted to allow Botswana, Namibia, South Africa and Zimbabwe to sell off their ivory stockpiles in a one-off sale to China and Japan, which took place in October and November 2008. A total of 119 tons was sold, representing over 10 000 dead elephants. Many conservation NGO’s believe this decision sends out the wrong signals, especially in light of the inability of many African and Asian elephant range states to prevent poaching and control illegal trade.

It is extremely difficult to control the trade in ivory. Where poor governance, mis-management and corruption exist, then poachers, middle-men and vendors will thrive. Both elephants and people are killed in the lawless wildlife areas of Central Africa especially. Unless the action plan for the control of domestic ivory markets, as approved by CITES in June, is implemented then unregulated ivory markets will persist, depleting elephant populations in all African and Asian ranges.