Every year Japan hunts hundreds of whales in Antarctica under the guise of what it describes as a “scientific research programme”. As usual, the 2007/2008 whale slaughter season started with the declaration by Japan that they would hunt 50 humpback whales (an endangered species), as well as more than 900 minke whales, in a move highly criticised by non-whaling nations.

Japan opposes the international prohibition on commercial whaling citing “cultural tradition” as their excuse for this mindless killing. The fact is, Japan never had a culture of whale slaughter (apart from a few isolated coastal villages that went in for the occasional whale kill, carried out with nets from shore), until a Japanese businessman named Jura Oka learnt the trade from the Norwegians in the 1890’s and set up the first whaling company using Norwegians harpooners and crew.

Apart from Japan, the two other whaling nations are Norway and Iceland. While Japan disguises its whale slaughter under the euphemism of “research”, Norway is quite blatant about the slaughter. In the last 25 years, Norway and Japan between them have killed 25 000 whales illegally and continue to snub their noses at the international community and the International Whaling Commission. 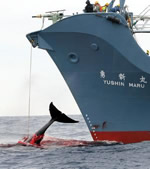 However in a piece of good news, Iceland, coming under pressure from international condemnation of its illegal activities and its inability to sell their whale meat to Japan, declared in August 2007 that it would cancel the whale killing in 2008. The situation in Iceland will continue to be monitored by the anti-whaling organisation, Sea Shepherd.

You can write to the Australian Prime Minister, urging him to lay a formal complaint in the International Court of Justice over Japan’s abuse of protected species. Japan’s forays into the Antarctic and in Australian waters will have a hugely negative impact on Australia’s massive whale watching industry, quite apart from the humane and conservation aspects of this continued slaughter.

You can also write to the Japanese Prime Minister: