Demand for wool invariably brings with it the cruelty and abuse of factory farming practices.

It may come from a sheep, goat, or Tibetan antelope. It may be called wool, mohair, pashmina, shahtoosh, or cashmere. But no matter what it’s called, any kind of wool causes harm to the animals from whom it is taken.

Many people believe that shearing sheep helps animals who might otherwise be burdened with too much wool. But without human interference, sheep grow just enough wool to protect themselves from temperature extremes. The fleece provides effective insulation against both cold and heat. Wool was once obtained by plucking it from the sheep during molting seasons. Breeding for continuous fleece growth began after the invention of shears. 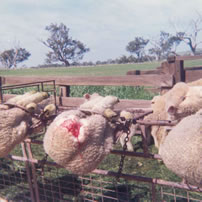 In Australia, the most commonly raised sheep are Merinos, specifically bred to have wrinkly skin, which means more wool per animal. This unnatural overload of wool causes animals to die of heat exhaustion during hot months, and the wrinkles also collect urine and moisture. Attracted to the moisture, flies lay eggs in the folds of skin, and the hatched maggots can eat the sheep alive. To prevent “flystrike”, Australian ranchers perform a barbaric operation “mulesing” or carving huge strips of flesh off the backs of unanesthetized lambs’ legs and around their tails. This is done to cause smooth, scarred skin that won’t harbor fly eggs, yet the bloody wounds often get flystrike before they heal.

Within weeks of birth, lambs’ ears are hole-punched, their tails are chopped off, and the males are castrated without anesthetics. Male lambs are castrated when between 2 and 8 weeks old, with a rubber ring used to cut off blood supply – one of the most painful methods of castration possible. Every year, hundreds of lambs die before the age of 8 weeks from exposure or starvation, and mature sheep die every year from disease, lack of shelter, and neglect. Faced with so much death and disease, the rational solution would be to reduce the number of sheep so as to maintain them decently. Instead, sheep are bred to bear more lambs to offset the deaths. 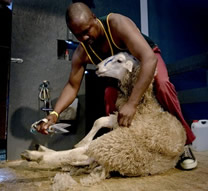 Sheep are sheared each spring, after lambing, just before they would naturally shed their winter coats. Timing is considered critical: Shearing too late means loss of wool. In the rush, many sheep die from exposure after premature shearing.

Shearers are usually paid by volume, not by the hour, which encourages fast work without regard for the welfare of the sheep. Says one eyewitness: “The shearing shed must be one of the worst places in the world for cruelty to animals. I have seen shearers punch sheep with their shears or their fists until the sheep’s nose bled. I have seen sheep with half their faces shorn off.”

When sheep age and their wool production declines, they are sold for slaughter. This results in the cruel live export of 6.5 million sheep every year from Australia to the Middle East and North Africa, and nearly 800,000 sheep are exported from the U.K. for slaughter abroad.

In Europe, tightly packed animals are subjected to long-distance trips, sometimes 50 hours long, without food or water. Their final destination is frequently a country with minimal slaughter regulations, where the animals often regain consciousness while being dismembered. In 2001, activists persuaded the European Parliament to adopt a report calling for journeys of a maximum of eight hours in livestock export, the first step toward creating a law.

In Australia, sheep travel vast distances over land until they reach the feedlots where they are held before being loaded onto ships. Many sheep, stressed, ill, or wounded from the journey and faced with intensive crowding, disease, and strange food, die in the holding pens.

The surviving sheep are packed tightly into ships. Younger animals or babies born en route are often trampled to death. Shipboard mortality ranges up to 10 percent, and for every sheep who dies, many others become ill or are injured. For example, 14,500 sheep reportedly died from heat stress while in transit to the Middle East in 2002. Their carcasses were thrown overboard.

In the Muslim nations of North Africa and the Middle East, ritual slaughter is exempt from humane slaughter regulations. Some sheep are slaughtered en masse in lots, others are taken home, often in the trunks of cars, and slaughtered by the purchasers. 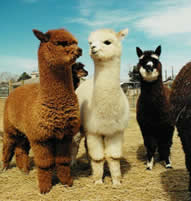 Shahtoosh and Other Kinds of Wool

Shahtoosh, used to make “fashionable” shawls, is made from the endangered Tibetan antelope, or chiru. Chiru cannot be domesticated and must be killed in order to obtain their wool. Illegal to sell or possess since 1975, shahtoosh shawls did a brisk business on the black market throughout the 1990s, selling for as much as $15,000 apiece as the Tibetan antelope’s population plummeted to less than 75,000.

Cashmere is made from cashmere goats. Those with “defects” in their coats are typically killed before 2 years of age. Industry experts advise farmers to expect to kill 50 to 80 percent of young goats whose coats do not meet standards.

Contrary to what many consumers think, “shearling” is not sheared wool; the term refers to the sheep. A shearling is a yearling sheep who has been shorn once. A shearling garment is made from a sheep or lamb shorn shortly before slaughter; the skin is tanned with the wool still on it.

Angora rabbits are strapped to a board for shearing, kicking powerfully in protest. The clippers inevitably bite into their flesh, with bloody results. Angoras have very delicate foot pads, making life on a wire cage floor excruciating and ulcerated feet a common condition. Because male angoras have only 75 to 80 percent of the wool yield of females, on many farms they are killed at birth.

The market for alpaca exploded in the 1980s, when South American alpacas and llamas were marketed worldwide to entrepreneurs who bought into the vision of ground-floor investment in a luxury fiber market. The craze subsided but breeding continues, and unwanted animals are now routinely put up for auction. Llama sanctuaries and rescue operations have sprung up in the wake of the breeding craze to handle the growing number of abused, neglected animals.

TEN REASONS FOR NOT WEARING WOOL

You probably wouldn’t have thought that the woolly jumper you’re wearing or those Ugg boots you love so much could be the cause of so much cruelty and suffering.

The truth is, there is a much darker side to the wool industry than you may have ever imagined, and no amount of fluff can hide the abhorrently cruel and bloody practices that millions of sheep have to endure every day.

1. Sheep don’t need to be shorn. Through no fault of our own, we are mistakenly led to believe that “sheep need to be shorn.” The reality is much more complicated. Sheep naturally produce only the amount of wool they need to protect themselves from extreme weather conditions. It is due to genetic engineering and the manipulation of the sheepÃ¢s wool production that we have left these defenseless animals dependent on human interference.

2. Mulesing. Half of the world’s Merino wool comes from Australia, where sheep are specifically bred to have wrinkled skin in order to increase wool production. This wrinkled skin is prone to flystrike due to the accumulation of excess moisture and urine. Flystrike is a painful condition in which flies lay eggs in the folds of the skin and the hatched maggots eat the sheep alive. The wool industry’s solution? Cutting off huge pieces of skin from the area around the tail and back of the legs, producing smoother, scarred skin that doesn’t harbor fly eggs. This barbaric practice is usually performed without anesthesia and causes a great deal of distress to the animal, and in many cases the bloody, untreated wounds often get flystrike before they have healed.

3. The wool industry is riddled with death and disease. To give you a better idea, ten million lambs die every year before they are more than a few days old in Australia alone.ÃÂ Why? Flocks usually consist of thousands, making it impossible to give proper care and attention to individual sheep.ÃÂ Rather than reduce the number of sheep in an effort to better maintain them, sheep are bred to bear more lambs to offset the deaths.

4. An estimated 1 million sheep die from exposure. Sheep have to be sheared in the spring before they naturally shed their winter coats. Shearing too late means a loss of wool, so subsequently they are sheared while it is still too cold, leaving them vulnerable and at risk of death from exposure due to premature shearing.

6. Lambs have to endure castration, tail docking and dehorning without anesthesia. Using a knife to cut out their testicles or a rubber ring to cut off the blood supply, a knife to cut off the tail, and a scraper blade or dehorning shears to remove the horn bud without any painkillers doesn’t sound very humane, does it?  All of these procedures are common practice in the wool industry, and cause fear, pain and distress.

7. Sheep are highly intelligent animals. They have incredible memories and can remember up to 50 individual faces (sheep and humans) for years! This is because they use a similar part of the brain and neural process as humans use to remember.

8. Sheep are gentle, loving and feeling individuals who are capable of a range of emotions. Extensive studies have been carried out proving that sheep have much richer emotional lives than we give them credit for.

9. Five million kangaroos are killed every year as a result of the wool industry. Excessive numbers of sheep have eaten the native flora upon which the kangaroo feeds, causing the yellow footed rock wallaby to become an endangered species. These native animals are now viewed as damaging pests and the Australian government permits the slaughter of an estimated 5 million kangaroos each year.

10. Every sheep shorn will eventually be sent to slaughter. When a sheep’s wool production declines, they are sold for slaughter. This terrifying and frightening ordeal requires the sheep to travel long distances in extremely cramped and crowded conditions. Many sheep die during the journey from exhaustion, dehydration, stress and injury, and lambs born during the trip are often trampled to death.

Sheep’s wool has been in steady decline since 1990, both in price and demand, with Australia’s former near-total dominance of the world market falling by about 35 percent in a decade. The U.S. government continues to try to shore up the American wool industry with millions of dollars in federal subsidies and loans.

Many people who are allergic to wool already use alternatives to wool clothes and blankets, including cotton, cotton flannel, polyester fleece, synthetic shearling, and other humanely manufactured fibers. Tencel-breathable, durable, and biodegradable is one of the newest humanely manufactured wool substitutes. Polartec Wind Pro-made primarily from recycled plastic soda bottles – is a high-density fleece with four times the wind resistance of wool that also wicks away moisture. Source: www.downbound.co.uk.