The demand for milk products (which is now found even in some fruit juices, potato chips and foodstuffs that were originally dairy free) has resulted in factory farming practices.

In order to sell the milk for human consumption, calves are forcibly removed from their mother a few hours after birth, year after year. This separation is devastating to both mother and her calf.

Male dairy calves, however, are ‘surplus’ and unnecessary to the dairy industry. They are also the wrong genetic makeup for beef production. Some are are either shot, killed by electrocution or are sold at live auctions.

Others are bred as veal calves, fed an iron deficient diet and kept in dark enclosures where they will never see the sun. Chained by the necks or with their heads built into the bars or wooden walls, they are effectively immobilised for the entire duration of their short, miserable life. Calves are by their nature very active and love to run and play. Many veal calves suffer from chronic and acute diarrhea.

Dairy cows and their young are ultimately killed as a routine part of milk production.

It is simply not possible to “humanely” produce milk to feed the huge demand of modern society.

HOW HUMANS SEE COWS (and other farm animals) 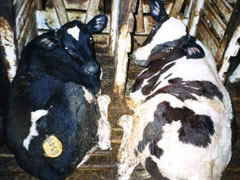 Quite simply, as commodities or resources.

However, cows are intelligent and curious animals who enjoy solving problems and interacting with their environment. Research has shown that cows clearly understand cause-and-effect relationships—a sure-fire sign of advanced cognitive abilities. For example, cows can learn how to push a lever to operate a drinking fountain when they’re thirsty or to press a button with their heads to release grain when they’re hungry.

Like humans and other animals, cows also quickly learn to stay away from things that cause them pain, like electric fences and unkind humans. Because of their complex social interactions, cows also have the ability to learn from each other, another indication of their intelligence, which is comparable to that of a dog and a bit higher than that of a cat.

According the Humane Society of the United States, if an individual cow in a herd is shocked by an electric fence, the rest will become alarmed and learn to avoid it. Only a small fraction will ever be shocked.

Some cows never forget those who have hurt them either, and they’ve been known to hold grudges against other members of their herd.
A herd of cows is very much like a pack of wolves, with alpha animals and complex social dynamics. Each cow can recognize more than 100 members of the herd, and social relationships are very important to them. Cows will consistently choose leaders for their intelligence, inquisitiveness, confidence, experience, and good social skills, while bullying, selfishness, size, and strength are not recognized as suitable leadership qualities. Cows form close friendships with some members of their herd—the relationships between mothers and daughters are especially strong, and calves bond with others in their peer group.

The social relationships between cows influence many parts of their daily lives. For example, when the herd settles down for a nap, each cow’s position and the order in which they lie down is directly related to their status in the herd. Source www.goveg.com

Naturally factory farming practices deny cows their natural behaviours and this causes stress and unhappiness. As you can see here, locally we have realized the product potential of Nguni cows:

Recent work has shown that Nguni cattle have the following advantages, they: 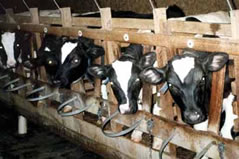 Although smaller in stature than many European breed the Nguni is still useful as a beef producer because of its efficiency at utilising food to produce bulk.  Nguni cattle will both graze and browse and instinctively identify the most nutritious resources available.  Furthermore, because of this efficiency, the impact of Ngunis on vegetation is less then that of some of the larger breeds.  It has been found that stocking rates with Ngunis can be up to twice that of European breeds. Source: www.zulucattle.co.za
As you can see, we look at cows only in terms of how they benefit us. The human race, as they say, is not the only species on earth, we just act like it!

We are used to drinking milk and eating cheese. That does not mean we need it or that it is healthy. Indeed there were many nations that were dairy-free for many thousands of years before meeting the West, all of whom were healthy.

At the age of 2 to 3 we lose the enzymes needed to digest milk. Most Africans and Asians are lactose intolerant and more and more people suffer milk sensitivities – why else would we now have milk that is processed to allow us to have it with no side effects? Doesn’t it make sense to just cut it out?

Human bodies are not designed to digest cow’s milk. Humans are the only species that drinks another species’ milk. Cow’s milk is specially created for their calves and in fact humans who drink cow’s milk end up with many health problems due to the allergic response the milk triggers in their bodies.

Calcium exists in every unprocessed food on Earth. In fact, sesame seeds contain more calcium than milk. All green leafy vegetables contain generous amounts of calcium. Strong bones are a result of weight bearing exercise as well as an alkaline diet.

The cause of calcium deficiency is the high protein, acid-forming diet of modern society. Your body leaches calcium from your bones in order to restore the pH balance in the blood, as well as creating urea in the liver, which has a diuretic action in the kidney, leaching vital minerals and calcium through the urine.

“Dr. John McDougall: “The primary cause of osteoporosis is the high-protein diet most Americans consume today … eating a high-protein diet is like pouring acid rain on your bones. Remarkably enough, both clinical and population studies show that milk-drinkers tend to have more bone breaks than people who consume milk infrequently or not at all.”

Udder infections from over milked cows result in somatic cells and bacteria in the milk. Dairy farmers control these infections with antibiotics which also end up in the milk.

The protein in milk causes allergic reactions in children ranging from skin rashes, ear infections and stomach problems to respiratory symptoms. Heiner syndrome is a lung disease that develops from a ood hypersensitivity and is largely due to the protein in cow’s milk.