“Every single species of large wild fish from the tropics to the poles has been fished so systematically over the past 50 years that just 10 percent of each type remains.” (Study by marine biologists Ransom Myers of Dalhousie University in Halifax and Boris Worm of the Institute for Marine Science in Kiel, Germany).

“We are tampering with the life-support system of the planet and that’s not a good thing to do,” (said by Dr. Boris Worm in regards to our oceans, Emmy-Noether Fellow in Marine Ecology at the German Institute). 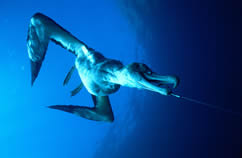 Commercial fishing is cruelty to animals on an almost unimaginable scale. Fish look so unlike humans that many people don’t realize that they feel pain, just as we do and lead complex intellectual lives that rival those of dogs and some other mammals. The way that these animals are treated by the commercial fishing industry should make animal lovers everywhere give up their taste for fish flesh for good.

Commercial fishing has become a big business, and the methods used to catch and kill the animals are as cruel as those used by factory farmers or slaughterhouse operators. In fact, the methods used to kill fish indicate that commercial fishers see their prey as no more sentient than rocks on a mountain—and the horrible cruelty that they inflict on hundreds of billions of fish is completely unregulated. 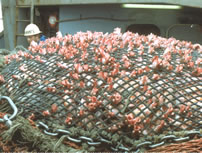 Yet commercial fishers kill hundreds of billions of animals every year—far more than any other industry—and they’ve decimated our ocean ecosystems. In fact, 90 percent of large fish populations have been exterminated in the past 50 years and a recent report published in the academic journal Science, estimates that by the year 2048 our oceans will have been completely over-fished.

Lifeless oceans may encourage growth in the fish-farming industry but the FAO is concerned that even fish farming will not be able to meet the demand for fish, since farmed fish need to be fed 2kg of commercially-caught fish for every ½ kg of fish flesh they produce.

Fishing Hurts Fish … and Other Animals, Too

Commercial fishing boats leave their ports in pursuit of specific species of fish, but their hooks and nets bring up thousands of pounds of other marine animals as well. Sharks, sea turtles, birds, seals, whales, and other non-target fish who get tangled in nets and hooked by long-lines are termed “bycatch” and are thrown overboard. They fall victim to swarming birds or slowly bleed to death in the water.

Scientists recently found that nearly 1,000 marine mammals—dolphins, whales, and porpoises—die each day after they are caught in fishing nets. By some estimates, shrimp trawlers discard as much as 85 percent of their catch, making shrimp arguably the most environmentally destructive fish flesh a person can consume.

Long-lining is one of the most widespread methods of fishing. Ships unreel as much as 75 miles of line bristling with hundreds of thousands of baited hooks. The hooks are dragged behind the boat at varying depths or are kept afloat by buoys and left overnight, luring any animal in the area to grab a free meal. Once hooked, some animals drown or bleed to death in the water, and many others struggle for hours until the boat returns to reel them in.

Large fish such as swordfish and yellowfin tuna, weighing hundreds of kgs each, are pulled toward the boat by the baited line. Fishers sink pickaxes into the animals’ fins, sides, and even eyes—any part of the fish that will allow them to haul the animals aboard without ripping out the hook. Many of the fish are still alive, and they are clubbed to death or slowly bleed to death when their gills are sliced open. Source: www.fishinghurts.com

Billions of fish, sharks, sea turtles, dolphins, birds, and other marine animals are injured and killed by long-lines each year. 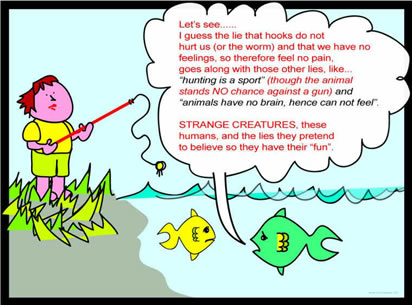 Whales and other sea life are getting stranded and cannot communicate because of such high noise levels in our oceans (caused by humans, of course):

“With their groans, clicks, booms and shrieks, marine mammals send warnings, point out good sources of food, and attract mates. But over the past four decades, says Clark, more and more man-made noises have been invading their acoustic universe. The noise produced by ocean-going humans falls into the same low-to-mid frequency range as many whale calls. Clark believes this acoustic competition has drastically reduced the distance over which whales can communicate and may be drowning them out altogether. 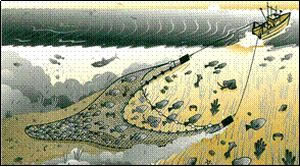 A report released December 3 by the International Fund for Animal Welfare – or IFAW – warns of the potential adverse effects of increasing noise pollution. In addition to impeding marine mammal communication and masking sounds produced by predators and prey, ocean noise may cause animals to lose their way, or it could interfere with essential behaviors like feeding and breeding. The report also contends that ocean noise has resulted in injury and even death by driving stressed animals to become entangled in fishing nets or to strand themselves on shore.” (VOA News)

The songs that whales and dolphins use to communicate, orient themselves and find mates are being drowned out by human-made noises in the world’s oceans, UN officials and environmental groups said…that sound pollution — everything from increasing commercial shipping and seismic surveys to a new generation of military sonar — is not only confounding the mammals, it also is further threatening the survival of these endangered animals.” Source: www.fishinghurts.com

Longlines are the most significant factor in the rapid diminishment of shark populations in the oceans. The sharks targeted are caught mostly for their fins (which account for only 4% of their body weight) and also for their cartilage, liver oil and teeth. If longlines are not abolished, the oceans will lose most species of sharks within the next decade.

No one knows for sure how many sharks die due to ‘finning’ annually, but it is thought that the number of sharks traded globally every year is between 26 – 73 million (Clarke et al 2006).

Millions of sharks also die every year after being caught by means intended to catch other fish, especially on longlines intended for tuna and swordfish. In the Mediterranean sea alone, as many as 100,000 sharks die as a result of by-catch every year.

If you feel you must eat fish, then please visit http://sassi.icecreamlovestheweb.com/home.asp?m=1 and use the list to guide your choices.