UKWESHWAMA -THE FIRST FRUITS FESTIVAL, KILLING OF THE BULL

Justice Malala wrote every eloquently on the slaughter of the bull during last year’s Ukweshwama ritual, in which young men killed a bull with their bare hands. The killing of the bull was to celebrate the first fruits of the harvest. The strength of the dying bull, it is believed, would be transferred to the king.

He makes it very clear that the aftermath, resulting from the ARA’s attempt to have the ritual halted through a court of law, ended up as a free-for-all about black versus white, European versus African, colonialist versus “freedom fighter”.

And in the furor everyone forgot about the bull.

There is no way that a bull killed by hand, by beating with fists and all the other terrible, terrible things that  were done to him, can take bare minutes to die, as noted by Chief Mlaba saying “We must use our bare hands, It’s cruelty, we agree, but it’s our culture. We cannot change our culture.” and goes on to say “For 40 minutes, dozens trampled the bellowing, groaning bull, wrenched its head around by the horns to try to break its neck, pulled its tongue out, stuffed sand in its mouth and even tried to tie its penis in a knot. Gleaming with sweat, they raised their arms in triumph and sang when the bull finally succumbed.”

This is in direct contradiction to Professor Jabulani Mapalala who said in court that the animal’s death was quick, unpainful and that no blood was shed. Blood or not, the death is anything but swift and free from pain!

The cultural defense that the bull must suffer because ancestors made animals suffer is irrelevant in a society where people live a life completely different to their ancestors and furthermore we know now that animals suffer at the hands of humankind, and suffer immensely. If the bull must die (and of course our stance is that it is never acceptable to kill anyone, except in self-defense) why may he not be slaughtered swiftly, with the least amount of pain? Why must cruelty be the defining issue of loyalty to the king or the success of the ritual?

Of course, it is rather odd that people can get so irate about the killing of one bull in a traditional ceremony when thousands of animals are raised and then killed in atrocious circumstances on a daily basis to satisfy the average person’s desire to eat meat. And that has been one of the arguments in favour of the ceremony. We cannot argue against this, the difference of course is that this happens in public view, well the invited few, at any rate, while the circumstances of factory farming and the subsequent slaughter, which applies equally to those living ‘free range’, are kept well hidden from public view and scrutiny.

But back to the bull.

Countries including Tanzania, Sierra Leone, the Democratic Republic of Congo, Kenya, Zimbabwe and delegates from ANAW (The African Network for Animal Welfare) signed a petition calling on Parliament to halt Ukweshwama, but to no avail.

Cultural ceremonies are protected in terms of the Constitution, including  those involving animals, however we do have an Animals Protection Act and as the bull in question is in fact, tortured to death, one would assume the APA overrides the constitution in this regard. Ukweshwama has been revived within the last few years and was dormant for many years before that. Whatever the reason, it was initially halted, surely the revival could have taken into account the new knowledge we have attained about animal sentience? Does torture really form part of the new South Africa?

Beauty Without Cruelty and the Living Without Cruelty ideology discards the notion of culture and tradition allowing or promoting the infliction of pain and suffering. Cruelty and suffering are universal, irrespective of culture, creed, background or ethnicity. We are equally against the everyday slaughter of animals for food, and the killing of animals for their skins, regardless of who the perpetrators may be. The infliction of suffering, both mental and physical, should not be considered a trait of which to be proud or something to which to cling.

Hinduism is one of, if not the oldest religion on earth. It is at least 8 000 to 9 000 years old and there is archeological evidence that supports this. So you’d expect serious opposition to changing ‘tradition.’

Unlike many other temples, animals are not sacrificed at the Dakshineshwar Temple, one of the most famous temples in India. Sugarcane and pineapples are offered and sacrificed instead.

Kali is the goddess of dissolution and destruction, known for destroying ignorance and helping those who strive for knowledge of G-d. Kali is worshipped as the Mother G-ddess who protects from evil. She also epitomizes strength and the darker side of life.

Kali Puja was celebrated and devotees from across India visit the temple every day to perform Kali Puja.  “Our Puja’s basic thing is we are duty bound to pray to our mother for welfare, not only for human beings but also for the animals. Here there is no animal sacrifice in the name of religion,” said Kushal Chowdhury, one of the trustees and secretary of Dakshineswar Temple. Sugarcane, banana and white pumpkins  are offered and ‘sacrificed’ instead.

Here is an excellent precedent for changing harmful practices while retaining the spirit of the intent. One need not kill a bull with bare hands to prove manhood or devotion to a king, we need not kill anyone to appease ancestors, celebrate a new home, or for any religious or cultural festival.

The welfare of an animal includes his physical and mental state and it is considered that good animal welfare implies both fitness and a sense of well-being, consequently any animal kept by man, must at least, be protected from ‘unnecessary’ suffering.(In our view, all suffering is unnecessary)

The ‘five freedoms’ define ideal states rather than standards for acceptable welfare. The concept of Five Freedoms originated with the Report of the Technical Committee to Enquire into the Welfare of Animals kept under Intensive Livestock Husbandry Systems, the Brambell Report, December 1965.  This stated that farm animals should have freedom “to stand up, lie down, turn around, groom themselves and stretch their limbs,” a list that is still sometimes referred to as Brambell’s Five Freedoms. 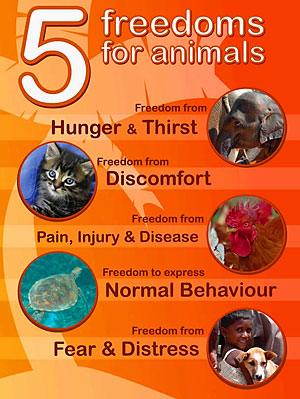