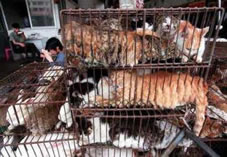 The appalling suffering behind the fur trade has taken on a new and sinister face in recent years. Images of dogs and cats suffering a miserable life in cold, cramped cages and being killed mercilessly for their fur continues to spark outrage across the world.

About 2 MILLION dogs and cats are being slaughtered each year internationally, primarily in China, to make fur-trimmed fashion items, trinkets and toys. The cruelty seen in overseas investigations is unbelievable. Many countries, including the USA, have already closed their doors to these products, sending China the message that this cruelty will not be tolerated. A proposal to ban dog and cat fur in the 27-country European Union (EU) came into effect on 31st December 2008, after a formal adoption by member states. EU Health Commissioner Markos Kyprianou said it “will help stop the slaughter of MILLIONS of cats and dogs in Asia whose fur is often sold to shoppers without them knowing the origin”. The ban will include the sale, production, marketing and import, or export, of dog and cat fur and products containing these types of fur. 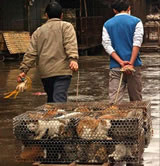 A spokesman for the Chinese ambassador in London has said, “Most of this fur is not for the Chinese market. So the Americans and Europeans should accept the blame…… We have no plans to clamp down on this internally – it is for the other countries to take their own action. They should boycott fur as a fashion material”.

However, neither South Africa nor Canada have any such bans in place. Canada still traps approximately 1 MILLION Canadian wolves, bobcats, otters, foxes, racoons, lynx and other fur-bearing animals in steel traps, every year. Trapping with these cruel devices is legal in Canada. In fact, Canadians even unashamedly kill their own national emblem, the beaver, in appalling Conibear traps, known as ‘body-grippers’, which are also legal!

If we do not begin to protest to our government, we stand the risk of being targeted as a dumping ground for ever-larger quantities of this ‘fur from hell’.

The time to act is NOW!

What you can do: