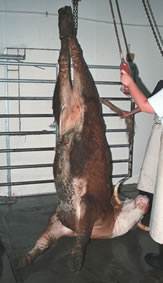 The assumption that leather is simply a by–product of the meat industry is, to a degree, correct, however millions of animals are slaughtered for their skins annually, with the flesh a secondary consideration.

The need for leather car upholstery in up-market cars, that lounge suite, jacket or pair of shoes, or a handbag in an exotic skin results in animals being sentenced to a lifetime of suffering.

We don’t consider the abuse suffered when we make a purchase – becoming a conscious consumer will and does make a difference.

There are many species who are hunted and killed specifically for their skins, including zebras, bison, water buffaloes, boars, deer, kangaroos, elephants, eels, sharks, dolphins, seals, walruses, frogs, crocodiles, lizards, and snakes. A large percentage of crocodile shoe leather and other items made from wildlife come from endangered, illegally hunted animals. Humane treatment is not a priority of poachers and hunters who deal in the dirty exotic leather trade:

Goats may be boiled alive to make kid gloves, and the skins of purposely aborted calves and lambs (for Karakul) are considered especially “luxurious.” Snakes and lizards are often skinned alive because of the belief that live flaying imparts suppleness to the finished leather. Alligators on factory farms are packed into half-sunken sheds, immersed in filthy stagnant water rife with their own waste and the stench of rancid meat. Crocodiles are often caught in the wild with huge hooks and wires and reeled in when they become weakened from blood loss or drown. Many animals are skinned when they are still alive-sometimes remaining conscious and in agony for up to two hours-and then beaten to death with hammers, axes, and aluminum baseball bats.

In Australia, where millions of kangaroos are slaughtered every year for their hides, orphaned joeys and wounded kangaroos are considered collateral damage and the government mandates that they be decapitated or hit sharply on the head “to destroy the brain.”

COW LEATHER
A herd of cows is very much like a pack of wolves, with alpha animals and complex social dynamics. Each cow can recognize more than 100 members of the herd, and social relationships are very important to them. Cows will consistently choose leaders for their intelligence, inquisitiveness, confidence, experience, and good social skills, while bullying, selfishness, size, and strength are not recognized as suitable leadership qualities. Cows form close friendships with some members of their herd—the relationships between mothers and daughters are especially strong, and calves bond with others in their peer group.

Cows are emotional animals who have likes and dislikes, just like humans do. The chair of the National Farmers Union in the United Kingdom, Tim Sell, explains, “They are all individuals and all have their own characteristics. They are tremendously curious. They have emotional storms. When it is a miserable, cold day, they will all be miserable, but when it is nice and sunny, you can almost see them smiling.”

Many cows are affectionate animals who are deeply loyal to their families and human companions. Cows use their body posture and vocal sounds to express a whole range of emotions, including content2ment, interest, anger, and distress. These gentle giants mourn the death of those they love, even shedding tears over their loss. Like humans and all animals, cows show strong reactions to bad treatment. For example, Dr. Ed Pajor of Purdue University found that cows resent being handled roughly: “The handlers don’t have to be really mean and hit the cows. It’s just a slap on the rump in the way that many farmers would. But the cows don’t like it and it makes a real difference.” Source www.goveg.com

Please consider the agony and terror your leather or skin purchase includes. Today, there are many excellent non-animal alternatives to sit on or wear.  The vast majority of animals slaughtered for their skin suffer all the horrors of factory farming-intense confinement, painful mutilations, deprivation, harmful hormone and antibiotic injections, and cruel treatment during transport and slaughter. 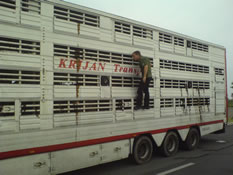 The majority of leather comes from developing countries like India, where ironically, the cow has been considered sacred for many centuries, and China, where animal welfare laws are non-existent. Most of the cows and other animals who are slaughtered for their skin endure extreme crowding and deprivation as well as castration, branding, tail-docking, and dehorning, all without any pain relief.

An undercover investigation in India documented that cows had their tails broken and chili peppers and tobacco rubbed into their eyes in order to force them to stand up and move after they collapsed from exhaustion on the way to the slaughterhouse. At slaughterhouses, animals routinely have their throats slit and are skinned and dismembered while they are still conscious after improper stunning.

Leather from cows comes from animals raised for both beef and milk. They are subjected to painful procedures like castration; branding, which causes third-degree burns; tail-docking; and dehorning – all without painkillers. Deprived of veterinary care, exposed to the elements with no shelter, these breathing, thinking, feeling beings, who feel pain and joy, just as we do, suffer immensely.

The transport of the cows results in them being jam-packed into metal trucks where, confused and terrified, they suffer from injury, freezing cold and blistering heat, overcrowding, hunger, and thirst. In the winter, cows routinely arrive for slaughter frozen to the sides of transport trucks or frozen to truck bottoms in their own feces and urine, and injured or dead from the journey. Frequently collapsing during their hellish ride, many cows arrive at the slaughterhouse unable to walk off the backs of transport trucks and are instead dragged off with chains, their bones breaking as they hit the ground.

Every year, 35.7 million cows are stunned, hung upside down, bled to death, and skinned in slaughterhouses. 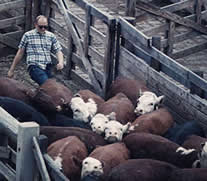 In America, the federal Humane Slaughter Act stipulates that cows should be stunned by a mechanical blow to the head and rendered unconscious before they are strung up, but the high speed of assembly lines that often process up to 400 cows per hour results in the improper stunning, each year, of millions of cows, who are consequently skinned and dismembered while they are still kicking and crying out in terror. Source: www.cowsarecool.com.