SHARKS
Research indicates that about 100 million sharks are killed each year by humans — roughly 11,000 sharks every hour, around the clock. The number of humans who die from shark attacks average 5 to 6 a year!
These numbers of shark deaths may even be on the low side, since the estimate is based only on the reported catch numbers and it is more than likely that many sharks are caught without being reported. Unfortunately, sharks have turned out to be a very vulnerable species at risk of destruction, and possibly even extinction, by man. Prized for their fins, meat, skin, teeth, organs and cartilage, sharks have in recent years been so heavily overfished that some species may never recover.

Commercial fishing accounts for a large part of the overall number of sharks caught. Sometimes the shark is the target, but many times it is just a victim of something called bycatch, when commercial boats haul in other types of fish in addition to the species the fishermen are after. The sharks caught as by-catch are often killed or injured in the process and usually thrown overboard. By far the most destructive practice is the harvest of SHARK FINS:  Gourmets will pay a fortune for specialist dishes made from shark fin, usually obtained by the barbarous practice of “finning”, where sharks’ tails and fins are cut off while they are alive, then the sharks are thrown back into the water to die drawn out, agonizing deaths. This practice is not only cruel and wasteful, but also absolutely pointless, as the harvested fins’ meat has virtually no nutritional value. Finning has been denounced by many nations, but it nevertheless continues to be practiced due to the high profits made by the traders and commercial fishing industry. 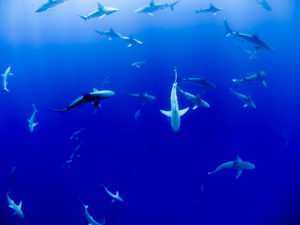 There are other species of fish that are more heavily targeted than sharks, but they don’t face the same threat of endangerment. One reason is because sharks typically reproduce only once a year, and they carry just 10 to 40 pups per pregnancy. This sets them apart from many other fish that deposit thousands of eggs at a time. The overfishing combined with the long gestation period and limited amount of young they produce has placed several species of shark on the protected list.

People still find it entertaining to fish for sharks. Very often the victims of this “sport” are just killed and thrown back into the sea. Even if the shark is still alive when released, they often die due to exhaustion. There are few laws and rules that regulate fishing for sharks. Shark jaws are still a popular trophy item. Small shark jaws are sold in gift stores as a cheap souvenirs. Some may be from shark species that are listed as endangered, but enforcement is not effective since it is not a major concern in comparison to other issues.

Needless to say – do not buy shark jaws, large or small. Remember that an animal had to die so you can hang something on your wall.

Shark skins can be tanned and used as an alternative to leather (for belts, boots, bags, etc. In theory and on a small scale, this could be a by-product of a sustainable and fisheries. In practice, there are few shark fisheries that can be called sustainable, even if they are licensed and permitted and claim to be sustainable, for now.

In the end, do we really need to wear boots and belts made from shark? It’s comparable to wearing a fur coat.