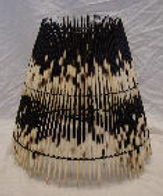 Before you rush out to buy that trendy Porcupine Quill lampshade, use quills as part of your dinner décor, buy little packets of toothpick sized quills for scrap-booking, think again. Like us, you assumed the quills were moulted, right?

WRONG! This article clearly shows that this thriving industry is killing our porcupines..

Porcupines are fashion’s latest victims, and could be under threat if the killing of the large rodents continues unchecked.

"There’s no doubt that a passion for prickles is encouraging the slaughter of Cape porcupines," says Christina Pretorius, the International Fund for Animal Welfare (Ifaw) spokesperson.

"What started out as a cottage industry using the quills of porcupines killed as ‘problem animals’ by farmers has mushroomed into a vast and sophisticated industry that is consuming an unlimited supply of quills and is responsible for the cruel deaths of unknown thousands of porcupines." 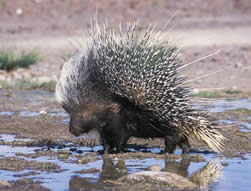 Besides being threatened by the quill trade, porcupines are also, according to a 2004 report by Cape for the Wild, one of the 54 000 animals killed by trophy hunters in South Africa annually.

According to the department of environmental affairs and tourism, hunters pay $100 (R700) to shoot one.

In a report released by Ifaw as part of its Think Twice campaign, which seeks to persuade tourists not to buy curios made from wildlife, researchers say they were offered consignments ranging from 1 000 to 17 000 quills in a single sale. In one instance, a bulk order of 80 000 quills was offered by a Beaufort West farmer with a promise to provide unlimited supplies from as far afield as Namibia, if required.

Despite their formidable defence mechanism, they are relatively easy to hunt. Some farmers encourage their labourers to hunt porcupines either by trapping or using dogs.
A dead porcupine can fetch anything between R600 and R1 500, while quills can be purchased from 50c to R6 each. The most expensive tri-coloured head quills retail at around R20 each.

While most suppliers said all their quills were picked up in the veld, the Ifaw investigation found this was impossible if one took into account the large number of quills available on the market and the fact that the rodents only shed a few at a time. 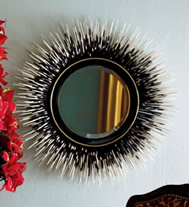 Because of the nature of the industry, most of the people operating within it did so undercover, making it difficult to track down the so-called middlemen who broker deals between suppliers and retailers.

"As the quill trade operates on an informal basis, there are no structures in place to determine accountability regarding the legitimate source of products or the number of quills being released to the market.

"Unlike other litigious issues such as canned lion hunting, where there are defined areas where these animals are bred and hunted, the quill trade has no tangible operating structure and therefore hunting and killing of porcupines and selling of porcupine by-products is carried out randomly and with no means of accountability," the report said.
The porcupine’s distinctive black, brown and cream striped quills are being turned into a range of products, including lampshades, jewellery, picture frames and glass coasters, to supply a growing demand by tourists and the decor and hospitality industries.

Researchers have found that most quills are exported because the South African market is saturated. 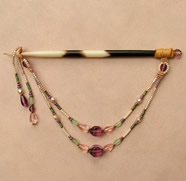 Porcupines are monogamous and only produce one litter a year. They occur widely and are hunted extensively in South Africa, yet there are no national or provincial estimates to determine population numbers within different provinces. This means there is no scientific understanding of the impact that localised hunting has had on porcupine populations over the past few years. It is believed that thousands of porcupines are killed each year.

These nocturnal animals are fairly destructive in their eating habits, and have been categorised problem animals or vermin, specifically in areas where they come into contact with people and agricultural practices. Among the factors that contribute to the negative status are crop raiding, burrows that cause obstacles for tractors and farm vehicles, their ability to bite their way through agricultural fencing and water pipes, and capacity to strip bark from trees.

In South Africa, the porcupine has no official classification and there is no enforced permit structure in place to regulate the hunting of, or trade in, porcupines. "It is generally assumed that the species is relatively common throughout the country and that the core population is stable. This assumption is not based on scientific analysis, as no studies appear to have been conducted to establish the impact of unregulated hunting on porcupine populations over the last few years."
The international conservation union’s red data list has porcupines listed as "least concerned". 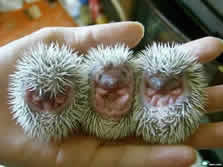 However, in the draft Biodiversity Bill, to have been signed into law early in 2007, the porcupine has been listed as a protected species, which by definition means an "indigenous species of high conservation value or national importance that requires national protection".
The report said if the porcupine was officially listed as a protected species this would afford it legal protection from indiscriminate hunting practices, as it would become illegal to hunt, or trade in any body part, without a relevant permit.
"The future protection of the species will only be effective if people comply with the new regulations."

But, given the geographical range of the problem and the general antagonism against the species, implementation of the regulations is going to be difficult to enforce, the report said.

"We believe that, through a collective commitment to finding a working solution within the agricultural and retail industries, and through increased public visibility of the problem, we can reverse the negative impact of the last few years and find a more positive outcome for the future of the charismatic Cape porcupine," the researchers said.

This article was originally published on page 4 of Sunday Independent on December 24, 2006

Cat and Dog Fur Trim: The grim truth behind the industry