THE SEALS OF NAM


BWC supports The Seals of Nam and Fur Free in their initiative to boycott Namibia as long as they continue to slaughter seals, including nursing pups for their fur, and in the case of the bulls, also for their penises for use in useless remedies, along with seal based Omega 3 oil. This action has gone global and the boycott action is being reported on around the world. Please join us!

The USA, Mexico, the EU and Russia have all banned the import of any and all seal products.

In Cape Town, mid March 2012, supporters braved the heat to leaflet, hand out ‘Club Sandwiches not Seals’ bumper stickers, and educate the public around the issue of the seal massacre. Musician Steve Newman showed his support of Beauty Without Cruelty and the boycott against Namibia, along with supporters from around the Cape. SA celebrities who support the initiative include, but is not limited to, Danny K, Louise Carver, Cito (from Wonderboom)  Jenna Clifford, Faizal Sayed, Steve Newman, Siyabonge Beyile, Roxy Louw, Mynie Grove and others. Visit https://sites.google.com/site/thesealsofnam for more information.

As part of the Anti-Sealing Day observed worldwide 15 March 2011, a press conference was held in Cape Town to create awareness of the annual massacre of around 85 000 nursing seal cubs in Namibia. Celebrity supporters include Verity, Siyabonga Beyile,  Faizal Sayed, Mynie Grovè, Roxy Louw.

On this day, the 15th of March 2011, celebrated worldwide as Anti-Sealing Day, Beauty Without Cruelty, Fur Free, and Sea Shepherd, together with their international partners, are announcing the official launch of a boycott against Namibia, which will continue until the annual seal massacre is permanently ended.

We would like to stress that we love our sister country Namibia, and that it pains us to take any adverse action against it. We hope and pray that the leaders of Namibia will see the folly of the seal slaughter, and will take definite and immediate steps to end it.

As Gandhi said: ‘The greatness of a nation and its moral progress can be judged by the way its animals are treated.”

Organisations involved: Beauty Without Cruelty, Fur Free, The Seals of Nam and others 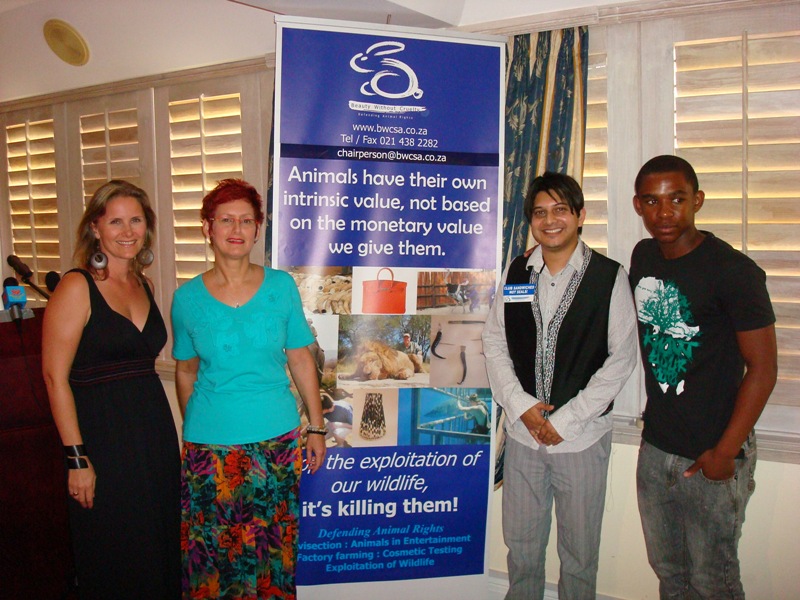 Verity, Toni Brockhoven, Faizal Sayed and Siyabonga Beyile in Cape Town,
at the Capetonian Hotel, who showed their support by donating the venue and extras.


Did you know that the Namibian Seal massacre is responsible for the largest slaughter of wildlife on the planet? It is considered to be the most brutal of all killings and is now officially responsible for the death of more seals than the Canadian slaughter. Namibia profits from products derived from seals such as seal skin  which popular as a luxury , the seal oil, which is rich in Omega-3 fatty acids, and there are two commercial uses, used for industrial grade oil and the production of cosmetics, paints, soaps and manufacturing of low-grade margarine!!

Over the counter products such as Omega-3 oils and capsules derived from seal products have already become part of sales of medicine in some countries and possible surgical implants from seal tissue have been on the table  as the use of seal heart valves for human heart surgery has of late shown to be promising, although this is as yet unconfirmed.

Every year for the past three years, the kill quota has been set at 85 000 nursing pups and 6 000 bulls. In the past, concessionaries have admitted that there are simply not enough animals to kill, and they seldom meet their quota. Yet the Namibian authorities insists on increasing the quota. 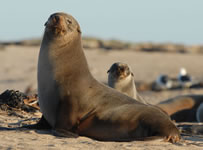 The Namibian Government has been resorting to non-existent laws to arrest and detain journalists who attempt to film the cull. See http://bit.ly/eAQzaU. The government also inflates the figures of the actual seal population to justify a higher cull quota – see http://tinyurl.com/5rpp7nx

Seal clubbers have been known to attack and beat journalists – see http://tinyurl.com/62vujny

The following footage shows how savage this “cull” is (warning – graphic content): http://tinyurl.com/5wfb3we

The Canadian harp seal faces mass extinction from this man-made slaughter, while at the same time battling the results of global warming (also man-made) that has seen a drastic reduction in ice floes, which are their breeding grounds 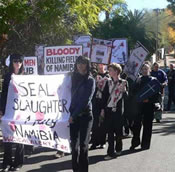 In addition to being a cruel, unnecessary slaughter, the harp seal hunt is one of the most glaring displays of Canadian mismanagement of the oceans. The Department of Fisheries and Oceans (DFO) has regulated the cod fishery into oblivion and is working hard to wipe out the seals now, in this cruel, wasteful massacre they call the ‘seal hunt’. In 2008, the sealers managed to kill over 215,000 seal pups after at least a quarter million drowned because of the historically poor formation of sea ice. Weather and these drownings prevented them from killing the rest of the 270,000 seal quota.

Once again, the sealers, mostly off-season fishermen from Newfoundland and Quebec, have cast shame on Canada as they smashed in the heads of hundreds of thousands more baby animals last year. They are supported by the Canadian government (and therefore the Canadian tax payer), who supplies spotter aircraft and ice-cutter ships to make their job even easier.

Keep in mind, 2007’s quota of 270,000 seals was IN ADDITION to the ecological disaster that took the lives of as many as a quarter million seal pups too young to swim. The massive drownings are the result of the abysmal ice conditions in the Gulf of St. Lawrence – the worst conditions in recorded history.

However, the efforts of activists around the world, and in particular the Canadian Senator Marc Harb who has brought a bill to end this senseless slaughter, may soon see the last of seal blood flowing on the ice. Together with the European Union, who has banned the import of any fur seal products, and the worldwide campaign to stop buying Canadian fish, the economic and moral screws are turning on the Canadian government.

Visit www.seashepherd.org; www.ifaw.org; www.hsus.org for more information and how to help end this terrible killing.

in Aquariums and Ocean Parks

in Animals in Medical Research/Testing