Until they get to know them, many people see sheep as dull and uninteresting animals. The truth is very different.

It is often difficult for people to recognise and understand sheep behaviour, because most of us are not used to being around sheep and because their facial structure makes it difficult for us to read emotion on their faces, like most of us can with cats and dogs.

Sheep have uniquely individual natures and are social, intelligent animals. As prey animals, they have a highly-developed flocking instinct, and prefer to move in groups rather than as individuals. Much of the behaviour seen in sheep is governed by a fear instinct (common in all prey species), and they are dependent on their flock for safety and comfort. They become highly distressed when separated from their flock, their fear evident when they call out for other members of their group and they will strive to rejoin the group. 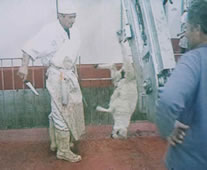 Sheep have developed complex physiological ways to disguise pain and discomfort. A sheep with advanced footrot (a painful hoof condition) may have been suffering for a considerable time before showing any outward signs – such as limping – of being in pain. This is because, as prey animals, sheep must avoid being easily identified by predators as being weak and therefore an easy target.

Sheep can remember 50 other sheep faces, even in profile. Even after two years apart, the sheep can respond to faces, calling out in recognition. The specialised face-processing system in the sheep brain offers advantages for long-term recognition of many individuals that are similar to those for humans, say the Babraham researchers. Source: www.liveexport-indefensible.com 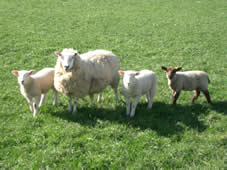 Sheep are precocial, gregarious animals. Precocial means that they have a high degree of independence at birth. Gregarious means that they flock together or like to be with a group. Sheep are social animals, but the most important reason they like to flock together is for protection. Some breeds of sheep are more gregarious than others and there are also some solitary breeds.
Sheep are timid, nervous and easily frightened animals and for the most part defenseless against predators like coyotes and wild dogs. Their only means of survival is to flock together in large numbers and to run away from predators. For this reason, shepherds are able to use dogs to move sheep around. Sheep will consider the dog as a predator, flock together for protection and move away from the danger.
Sheep have a flight zone, which is the space they like to keep between themselves and others. The flight distance depends on the situation and on the tameness or wildness of the sheep.
Sheep rank in intelligence just below the pig and even with cattle. They react to situations they encounter using instincts that have developed over centuries.
Sheep see in color. They have a poor depth perception and for this reason, sheep will avoid shadows or harsh contrasts between light and dark. They will move towards the light.
Sheep have an excellent sense of hearing. They are more sensitive to high frequency noise than people and get scared by loud noises. Source: www.veganpeace.com

Why Not Free Range?